Sweet Melody is a rockstar romance book that was released on September 11, 2021.

Baking comes to Jamison as naturally as her curves, and she plans to share both with Ryder when she sees him again. Growing up, she was the caring but feisty "little sister" to the famous rock band Shaken Dirty, but now she's ready to break free from that image. When she joins the band on tour, Jamison uses her professional skills to create a delicious recipe for attraction.

Ryder may be the sexy, dark lead singer of the rock band Shaken Dirty, but off-stage he struggles with his inner demons. Jamison has always been a source of light in his life, but there's a new, forbidden electricity between them when he sees her again. Ryder knows she's off-limits as his best friend's little sister, yet he can't seem to keep his mind off of her— and now she's joining him on tour.

Ryder used to be the object of your hardest teenage crush— now he's a famous, irresistible rock god. And you? With a delicious new set of curves and confidence that could tame any man, you know Ryder will be drooling for more than your cooking when you join Shaken Dirty on tour. He's always been untouchable, but what happens if he's finally ready to touch you back?

Chapter 1: Girl at the Rock Show

Ryder used to be the object of your hardest teenage crush— now he's a famous, irresistible rock god. And you? With a delicious new set of curves and confidence that could tame any man, you know Ryder will be drooling for more than your cooking when you join Shaken Dirty on tour. He's always been untouchable, but what happens if he's finally ready to touch you back?

Mixed signals from Ryder leave your head spinning and your body aching. But what Charles has to say could change everything, especially when you find Ryder vulnerable and in need of your help.

Talking with Ryder in the early hours of the morning leads to some intense moments. The only thing that matches that heat is when you get back into the kitchen.

Chapter 4: Burnt to a Crisp

After Sandy's horrible news, you have no choice but to face Charles. But just as it seems like everything is crumbling around you, a new opportunity could be just what you need.

You're excited to be the band's personal chef - and to be traveling with Ryder. Your first day handling the tour bus kitchen is going to be hot - in more ways than one.

You pick a restaurant to visit for the first episode of your blog. When Ryder offers to join your expedition, things get spicier than you expected.

You and Ryder finally talk about the spark between you- which only further shakes your forbidden attraction. Meanwhile, it's time for your first Shaken Dirty episode with Wyatt.

You've been afraid of losing control after seeing Ryder at the concert, but it seems like he's just as close to giving in. So, when the band takes a slight detour on the way to Texas, an unexpected night brings you closer than ever.

Ryder appears at your door in the middle of the night and he only wants one thing: you.

After a steamy night with Ryder, you're eager to know what he's thinking. In the meantime, you have plans to visit the restaurant that started your dream of becoming a chef.

A secret moment alone could get you in trouble before you even have a chance to enjoy your time with Ryder. If you can make it out okay, he has a special day planned just for you.

Your blog reaches new heights when a restaurant in New Orleans requests your presence. As you prepare for your most professional episode yet, Ryder asks for a special favor.

Ryder's mixed signals make it difficult to focus on your future, especially once everything comes crashing down. 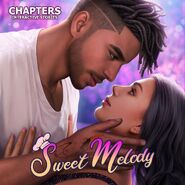