Stealing His Thunder is a spicy romance book that was released on February 20, 2021.

Fox will let you join his crew— if you pass the test. But this Dom is just as sexy as he is dangerous. When things heat up between you, will you be able to prove yourself? Or will you be the one who gets burned?

Fox Larson is sizzlingly hot, dangerous as hell, and your new target. But with a potential job on the line, will you be able to make Fox an offer he can't refuse?

You made a sexy, high stakes bet with Fox! But when he takes you on your first real job, will you be able to keep up?

You just got back from your first, adrenaline-packed job with Fox! When he takes you inside, will you be able to resist this sexy, commanding Dom? Or will things finally get hot and heavy in Vegas?

Feathers and wrist cuffs are hot, but Fox Larson has even more in store for you. Are you ready for the hottest night of your life?

Every day with Fox is sexy, adrenaline-packed, and totally unexpected. But when your family needs you most, will you be able to bet big with this sizzlingly hot Dom, and save the day?

Fox has you pinned against the sexiest car you've ever seen! Will you get hot and heavy in the garage?

A cop is following you! Will you and Fox be able to escape?

It's hot and heavy in Vegas! Will tempers flare, or will you give yourself to Fox completely?

Chapter 11: Cards on the Table

Fox is almost ready to let you into his crew! But will you be able to make the cut?

Chapter 12: All or Nothing

Things are getting steamy between you and Fox at the club! Will you let him have his way with you?

Fox wants all of you. Will you surrender to this sizzlingly hot thief?

Chapter 14: Down to the Wire

A war has started between Vegas's rival gangs. When the chips are down, will you be able to protect Fox, and yourself?

Chapter 15: Luck of the Draw

Fox wants to fight for your relationship. But with the biggest job of your lives approaching, will you fold under the pressure?

It's the night of the big job. Can you, and the crew, pull it off?

Marcel has a gun pointed at Fox's heart! Will you be able to save the day, and the man you love?

Chapter 18: All Bets Are Off

The crew needs you to finish the job! Can you come through, and prove yourself to be one of the best thieves in Vegas?

You and Fox bet big, and survived the big job! But will you get your happily ever after?

I should text Fox something... 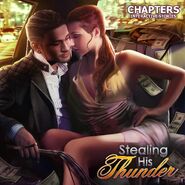