Rivalry & Ruin is a dark romance book that was released on September 3, 2021.

The Troublemaker Next Door

Celia Werner is sexy, assertive, and strategic enough to wrap men around her finger and manipulate them into giving her anything she wants. She hides her true emotions behind an icy exterior, but there’s a passionate and romantic woman beneath it all.

A wealthy and powerful CEO, Edward Fasbender is sexy and refined with a hard edge. He’s arrogant and views himself as a predator looking for the ultimate prey, dominant in everything he does and says. But has he finally met his match?

Edward Fasbender: powerful, dominant, and all-too used to getting what he wants. Bringing down your father's business rival should be easy for a woman as cutthroat as you. Ruining men like Edward is your favorite pastime. But games of dark attraction only end one way— will you come out on top?

Edward Fasbender: powerful, dominant, and all-too used to getting what he wants. Bringing down your father's business rival should be easy for a woman as cutthroat as you. Ruining men like Edward is your favorite pastime. But games of dark attraction only end one way— will you come out on top?

Edward's shocking proposal leaves you with more questions than answers. What are his real motivations? And why can't you get his dangerous smirk out of your head?

Bringing Edward to his knees is the biggest challenge you've ever faced. When you meet him on your own terms, all bets are off. And there's one burning question you're dying to ask...

Tension rises between you and Edward as you start to uncover the main beneath the icy exterior. But he wear's his air of mystery like a coat- can you strip him bare and learn his secrets?

Chapter 5: Rumor Has It

When you bump into Edward at brunch, he's more determined than ever to win you over Sparks fly with every word and gesture but his kinks are more scandalous than you ever imagined.

A glamorous banquet, a thrill of deception, and a dangerous kiss...

Hiding your face behind a mask, you step deeper into Edward's world. Passion, lust, and pleasure abound at this sex party. Have you fallen too far down the rabbit hole?

It's time to give Edward your answer. Will you marry him, or will you walk away forever? Once you fly to London, there's no turning back.

It's time to meet the family. Will they see right through you, or will they welcome the happy couple?

As you and Edward weave a beautiful lie together, the lines between real and fake start to blur. If this engagement is nothing but a business deal, why do his dark demands make your heart pound?

Chapter 11: To Have and to Hold

Chapter 12: Till Death Do Us part

For better or for worse, you and Edward are bound together. Can you tie the knot without getting your hearts tangled?

You're finally alone with Edward. Will you give in to the dark desire between you?

Chapter 14: Come Fly With Me

Edward whisks you away on his private jet. Will this be the honeymoon of your dreams? Or will it all come crashing down?

What good is a private island if Edward keeps avoiding you? It's time to seduce your husband— and you're a master of seduction.

It's time to make your decision. Will you become Edward's submissive?

Edward brings you to another secret hideaway. Will the open ocean wash away the sins of the past? 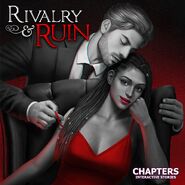