Erin Brown is a renegade rocker who seizes fame and lives life fearlessly. But when tragedy leaves her life uncertain, she reunites with the two men she never thought she'd see again. Now, Erin is more than ready for a little action— but will she submit fully to the dominance of two scorching hot men?

Todd Keenan is a by-the-book officer who always plays by the rules... except when he's in the bedroom. When he meets Erin, she'll unlock his wild side and release the dominance buried beneath. But when Ben comes to play, are all bets off?

Ben Copeland is a charming, sensual soul with an open mind, so he's more than happy to join Todd and Erin in the bedroom. But when heated nights start to turn into simmering days, will Ben open his heart to a relationship he never dreamed of?

Todd Keenan is rough, ready, and more than capable of handling your wild rocker side. But when circumstance tears you apart, a reunion with Todd and his sweet, sensual friend Ben will tangle the three of you in a heated play of dominance. Will you hand Todd and Ben the reins to pleasure?

Chapter 1: Getting on the Off Ramp

Todd Keenan is rough, ready, and more than capable of handling your wild rocker side. But when circumstance tears you apart, a reunion with Todd and his sweet, sensual friend Ben will tangle the three of you in a heated play of dominance. Will you hand Todd and Ben the reins to pleasure?

Your visit to Todd's house has taken a turn you never expected. Will you let the passion between you simmer- or turn up the heat?

Todd has finally agreed to attend your concert... but he isn't alone. With Ben and Todd watching your performance, will you blow them away?

Chapter 4: Out of Control

With you and Todd on the same page, it's time for a lot more action. Will you unleash Todd's dominant side and let your passions run free?

Todd has confessed that this is more than just a fling. Will you let Todd in? Or will unexpected circumstances drive you apart?

After six years, Todd has reappeared in your life-and he's more dominant than ever. Will you embrace this old flame and succumb to your burning passions?

Chapter 7: Taking the Next Step

With Todd taking you out on your first, official date, things are starting to get serious. But with Ben still in the picture, can the three of you sort out an arrangement?

Ben has an idea for you and Todd... but what could it be? And will a triple threat of passion promise to turn your evening into something more?

Ben and Todd want to form a triad! But what does this mean for the three of you and your growing passions? And how will you juggle your past with the present?

After the disaster at the family barbecue, the last thing you expected was to hear Todd declare his love for you. How will you respond? And where does this leave the triad now? 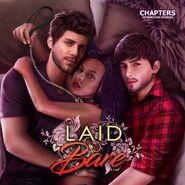