When the uber-popular boyband Gold enrolls at your high school, the entire female population of Oakwood Academy is swooning... except for you. You know better than to let their TV-ready looks and dazzling smiles make you dance to their tune — right?

When the uber-popular boyband Gold enrolls at your high school, the entire female population of Oakwood Academy is swooning... except for you. You know better than to let their TV-ready looks and dazzling smiles make you dance to their tune — right?

So your locker's been hijacked by Oakwood Academy's most eligible rockstar. You wanted your senior year to end on a high note, but its shaping up to be one hell of a flat!

Chapter 3: Stepping It Up

He's got the perfect smile, a cocky attitude, and cheekbones you could cut your heart on. With Rian Drew hot on your heels, will you be able to survive your senior year with your heart intact?

With Kevin's house party just around the corner, tensions between you and Rian are amping up to a fever pitch. Rian's determined to make you swoon, but you're not one to march to another man's tune.

Just as things were heating up between you and Rian, Noah swoops in to steal the show. Will he get what he's after, or is he whistling in the dark?

Noah's secret is out, but he doesn't want to make a song and dance of it. Will you be able to keep his secret, or is it time for Noah to face the music?

The secret's out: you're dating Noah Alexander, and the entire student body of Oakwood Academy is abuzz with the news. But Rian's not thrilled to play second fiddle. Is it time for him to make his move?

A date with Gold's lead singer? Rian's finally hitting all the right notes.

Chapter 10: Battle of the Boybands

When you take the boys of Gold to visit your parents, a ping-pong tournament turns into a high-stakes game of love and loss, and your heart hangs in the balance!

The original author of the story is Jordan Lynde. Her welcoming message for readers of the book is:

Jordan Lynde is a YA/NA author from western Massachusetts. When she's not writing, you can find her eating at new places, interacting with her readers on social media, or watching K-dramas with her cats. Follow her on Twitter at @jordanlynde_. 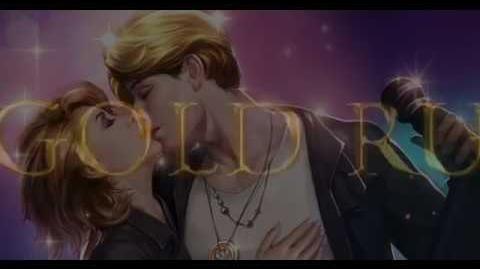 Retrieved from "https://chapters-interactive-stories.fandom.com/wiki/Gold_Rush?oldid=4325"
Community content is available under CC-BY-SA unless otherwise noted.