Drive Him Wild is a opposites attract romance book that was released on July 16, 2021.

Wren O'Brien isn't your typical girly-girl. Bolder than her six brothers combined, she has killer legs and a killer mouth to match. But a dangerous ex has left her scarred. Could the last person she'd expect — a clever Brit who puts the "gentle" in "gentleman" — heal her wounded heart?

With his tailored suits and smooth English accent, Evan Jonah is sure to turn heads when he moves to Philadelphia. This charming tech genius is a good man with an even better heart. But that doesn't stop him from fighting for what he wants. And what he wants is a kickass girl like you.

Smart, suave, and shockingly sexy, British tech genius Evan Jonah is as refined as his tailored suits. You’re a rebel who prefers fast cars to lip gloss and bad boys to good men. That is, until Evan turns your world upside down… by letting you take the wheel. Are you ready to drive him wild?

Smart, suave, and shockingly sexy, British tech genius Evan Jonah is as refined as his tailored suits. You’re a rebel who prefers fast cars to lip gloss and bad boys to good men. That is, until Evan turns your world upside down… by letting you take the wheel. Are you ready to drive him wild?

You and Evan are moving fast! Will you hit the brakes? Or is this spark between you unstoppable?

You've just closed a massive deal with Evan. But when he tells you he wants more than just the car, what will your answer be?

Chapter 4: Pedal to the Metal

You have a choice to make. Will you finally let Evan into your world? Or will you tell him to hit the road?

Chapter 5: Crash Into You

After hearing a mysterious sound from inside your house, will fate tear you and Exan apart... or bring you closer together?

Your polite, English man may not be so polite in the bedroom. When he asks you if he can stay the night, what will your answer be?

When Evan winds up half-naked in front of your family, including your knife-wielding mother, what will you say to save him?

With an accident at your dealership, things are spiraling out of control. But with Evan's help, can you turn this car around and find a new path?

You've tried to keep your hands off Evan, but this working relationship is harder than you thought. Will you accept Evan's offer to throw caution to the wind?

After a hectic few days, Evan has offered you a spa day! Will the two of you finally get to relax... and heat things up under the steam?

As Evan's feelings for you deepen, you introduce a new, nude element to your relationship. Will it bring you closer together? Or will you spin out of control?

Evan has finally asked you to be his girlfriend! What will your answer be? And where will a surprise take the two of you next?

You've been cornered by your ex, Bryant... but is there more at play here? And can you and Evan save the company? Or is this the end of the rood?

You've finally saved Evan's company, but there's just one problem... you have a wedding to get to! Will it bring you and Evan closer than ever before?

Evan has invited you on the trip of a lifetime to London! Will your relationship take the next step under the rainy skies of England?

Your perfect trip with Evan to London has been upstaged by the arrival of his ice-cold mother. Will you be able to dodge your way out of this one?

Your big meeting to save Evan's company was just interrupted by footage of you. Will you and Evan cruise past this together? Or is this the final lap?

Chapter 18: The Foxes and the Hound

Evan has finally confessed his love for you, but will you accept it? And what's waiting for you both back home?

Chapter 19: Shot in the Dark

Bryant has found you at last. Will you and Evan make it out alive and drive your getaway car to victory?

After the showdown to end all showdowns, you're miraculously alive. Will you finally seize your chance with Evan... and drive him wild forever? 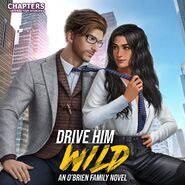