Dirty Rich One Night Stand is a sexy lawyer romance book that was released on June 25, 2021.

Cat Maxwell is the most respected name in crime journalism: as a former lawyer who's covered the biggest cases in town, she knows what she's talking about. But her no-nonsense professionalism might meet its match in arrogant lawyer Reese Summer, who is determined to get under her skin.

Arrogant defense attorney Reese Summer can win over anyone: judges, jury members, and his never-ending list of one night stands. Will irresistible court reporter be another notch on his bedpost, or will she be the one to break down his walls?

A dirty rich one-night stand: that's all it is supposed to be. Reese is an arrogant lawyer who's far too used to getting what he wants. You're the headstrong court reporter covering his murder trial who's determined to put him in his place. Can you get Reese out of your system, or will a night with him leave you both wanting more?

A dirty rich one-night stand: that's all it is supposed to be. Reese is an arrogant lawyer who's far too used to getting what he wants. You're the headstrong court reporter covering his murder trial who's determined to put him in his place. Can you get Reese out of your system, or will a night with him leave you both wanting more?

You hate lawyers. Reese hates court reporters. So why has learning each other's true identities only intensified your desire?

After Reese shows you a side of him you haven't seen before, it becomes harder to resist his charms.

Reese has a reputation for sleeping around. But could there be more to the story?

Reese's rivalry with the prosecutor runs even deeper than you thought, What happens when you find yourself caught in the middle?

The tension between you and Reese explodes after an unexpected encounter. Will going home with him break the tension, or intensify it?

You fold Reese you could give him one night. But after he rocks your world in his penthouse... could you be tempted to stay?

The line between your work life and your personal life begins to blur after your night with Reese. Can you take the heat?

After Reese learns why you hate lawyers, he suggests an intimate exercise. Can you trust him?

After a hot weekend together, Reese brings you further into his world. Are you ready for this dirty rich one night stand to turn into something more?

After a leaked story sends the murder trial into a tailspin, Reese's trust issues with reporters return with a vengeance. Can you help Reese heal old wounds?

Chapter 12: Never Have I Ever

After you finally learn the origin story behind Reese's trust issues with reporters, you and Reese take your relationship to a whole new, steamy level.

Overwhelmed by the trial, you and Reese let loose at a dive bar. Nothing gets you both riled up like a little healthy competition...

Reese closes in on a new suspect in the murder trial. Can you help him win?

Chapter 15: Into the Lion's Den

Now that victory is near, you and Reese are invited to stay in the Wards' mansion in the Hamptons for the weekend. You can't resist a little danger...

Chapter 16: A Wolf in Sheep's Clothing

After taking your relationship with Reese to a whole new level, you make a shocking discovery about the murderer's identity. This will change everything...

Chapter 17: Fake It Until We Make It

Enemies surround you on all sides. You and Reese will have to be sneaky if you want to outwit them. A little roleplaying should do the trick...

The news is out: everyone knows about you and Reese. Can you save your reputation... and your relationship?

The truth is out, and Reese is going after Nelson to confront him. Will you be able to save him, or will Nelson get the best of you both?

Your dirty rich one night stand has spun into something more real than you ever imagined. Can you make it last forever? 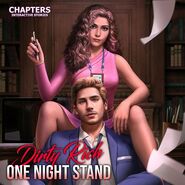